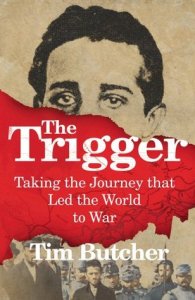 Blurb: On a summer morning in Sarajevo a hundred years ago, a teenage assassin named Gavrilo Princip fired not just the opening shots of the First World War but the starting gun for modern history, when he killed Archduke Franz Ferdinand. Yet the events Princip triggered were so monumental that his own story has been largely overlooked, his role garbled and motivations misrepresented.

The Trigger puts this right, filling out as never before a figure who changed our world and whose legacy still has an impact on all of us today. Born a penniless backwoodsman, Princip’s life changed when he trekked through Bosnia and Serbia to attend school. As he ventured across fault lines of faith, nationalism and empire, so tightly clustered in the Balkans, radicalisation slowly transformed him from a frail farm boy into history’s most influential assassin.

I’ve read several of Butcher’s books, which combine modern travelogues with historical journeys (I recommend all of them, by the way–they’re fantastic). In The Trigger, the author retraces the journey of Gavrilo Princip, the young man who assassinated Franz Ferdinand, providing the spark that ignited World War One. The writing style is, as always, wonderful; Butcher is a journalist and his prose is compulsively readable. This book is set in the former Yugoslavia–a country whose very name means “land of the South Slavs”–and Butcher was there 20 years ago reporting on the wars as the nation was torn apart. The blend of history and personal narrative was, as always, fascinating reading, and I’d recommend the book to anyone who has an interest in the history of this part of the world. That being said, I didn’t find The Trigger to be as compelling as the author’s other work, likely because there’s so little information about Princip himself around which to built the rest of the book. That’s not the fault of the author, though; as the book itself explains, competing ownership of Princip and his motives over the last hundred years make any attempt to get to the truth very difficult indeed. And that’s Butcher’s strength–in Blood River: A Journey to Africa’s Broken Heart, Chasing the Devil: The Search for Africa’s Fighting Spirit, and now The Trigger, Butcher recognizes the complex history and politics of these regions and presents them as such; he doesn’t attempt to make it simple and easy to understand.